Districting or Territory Design is the problem of grouping small geographic areas (so called basic areas) into larger clusters (so called districts or territories), in a way that the latter are acceptable according to relevant planning criteria. Typical examples for basic areas are cities, counties, zip code areas, streets etc. 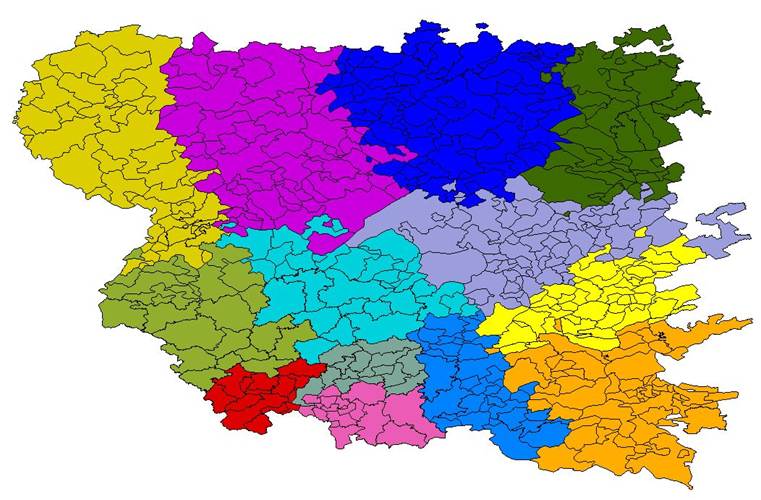 Partitioning based on zip code areas.

There are several different applications of districting.

Political Districting
The aim of political districting is to divide a governmental area (for example a state, federal state or city) into subareas from which political candidates are elected to a parliamentary assembly.  To respect the principle of “one man-one vote”, i.e., every vote should have the same power, all subareas should contain (approximately) the same number of voters. In this case a city, suburb, or neighborhood often should be assigned completely to a subarea. Hence, cities, suburbs, or neighborhoods are the basic areas. Other designated planning criteria are contiguity and compactness. These criteria should prevent “Gerrymandering” – a degenerated districting beneficial for a certain party or candidate. 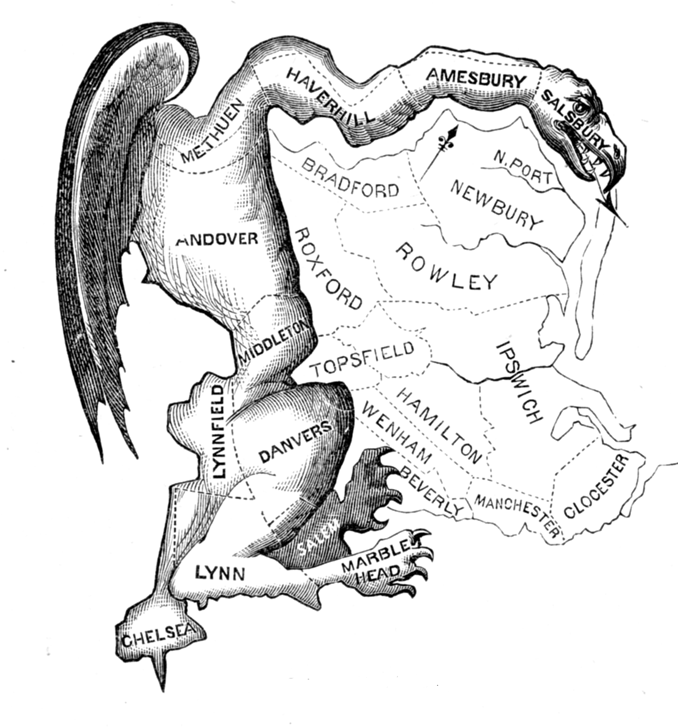 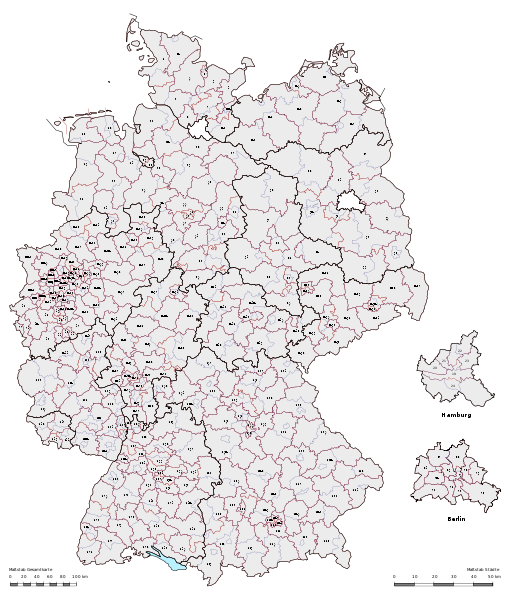 Sales Districting
The task of designing sales districts is to divide the market area in regions of responsibility for every salesperson or office. Every salesperson should have (approximately) the same workload. To minimize the (expensive and nonproductive) travel time, the regions should be contiguous and compact. Other planning criteria could require the same sales potential to every region or a good accessibility (e.g. highways, public traffic) within the district. Typical basic areas in this case are cities or zip code areas, but also smaller sales districts or single costumers. Often the desired number of regions and the locations of the salesperson are given by the company, but both could also be part of the planning process. Especially for sales companies, profit maximization is another important criterion for the planning process.

School Districting
School districting is the problem of assigning residential neighbourhoods (for example streets, blocks, or quarters) to existing schools. Here capacity limitations, like the number of rooms in the school buildings, are important planning criteria. Other criteria could require a balanced capacity utilization of the schools, a minimization of the unproductive travel time or a good accessibility of the schools by public traffic.  Especially in the U.S., racial balance is often another important design criterion – the rate of students, which belong to a racial minority, should be (approximately) equal for all schools to offer all students the same opportunities.

Assigning of streets to existing schools.

Winter services and solid waste collection districting
The objective of this districting problem is an assignment of streets, street segments, blocks or quarters to areas of responsibility for one vehicle depot or one collection/spreading vehicle. Possible constraints are the balance of workload and travel time between the different depots. Furthermore the areas should be contiguous and compact to reduce the needless travel time. Additionally the areas should allow the planning of “good” routes.

Electrical waste recycling districting
This problem is motivated by the recycling directive WEEE (Waste Electrical and Electronic Equipment) of the EU. The core of this directive is that each company which sells electrical or electronic equipment in a European country has the obligation to recollect and recycle an amount of returned items which is proportional to its market share. For one group of products, the so-called “white goods”, i.e., household appliances, each regional collection station is assigned to one company for a given period of time. Whenever a collection device at this station is full, this company is responsible for the waste treatment. However, in contrast to other problems of districting, the collection stations of one company should be geographically as dispersed as possible. This criterion should avoid that a company gains a monopoly in some region.

An Assignment of collection stations to companies that fulfill the requirement that the territories should be geographically as dispersed as possible.

The considered planning criteria are depending on the application and can be placed under the three general headings: demographic, geographic and political:

Left: Balanced / Unbalanced with respect to the green points. Middle: The districts in the first partitioning seem to be more compact than in the second partitioning. Right: Contiguous / Uncontiguous districts.

A variety of research works are dealing with special applications. In contrast to this, we try to look more generally on the problem. In our group we use a generic, application independent model and a specially tailored algorithm, based on methods from Computational Geometry.

Our aims of research are to develop extensions and modifications of this generic-model to make it applicable for a broader range of practical problems.  This contains for example problems like the incomplete assignment of basic areas, overlapping districts, hierarchical partitioning or balancing over a period of time. Furthermore, it contains interdisciplinary issues, like political considerations.